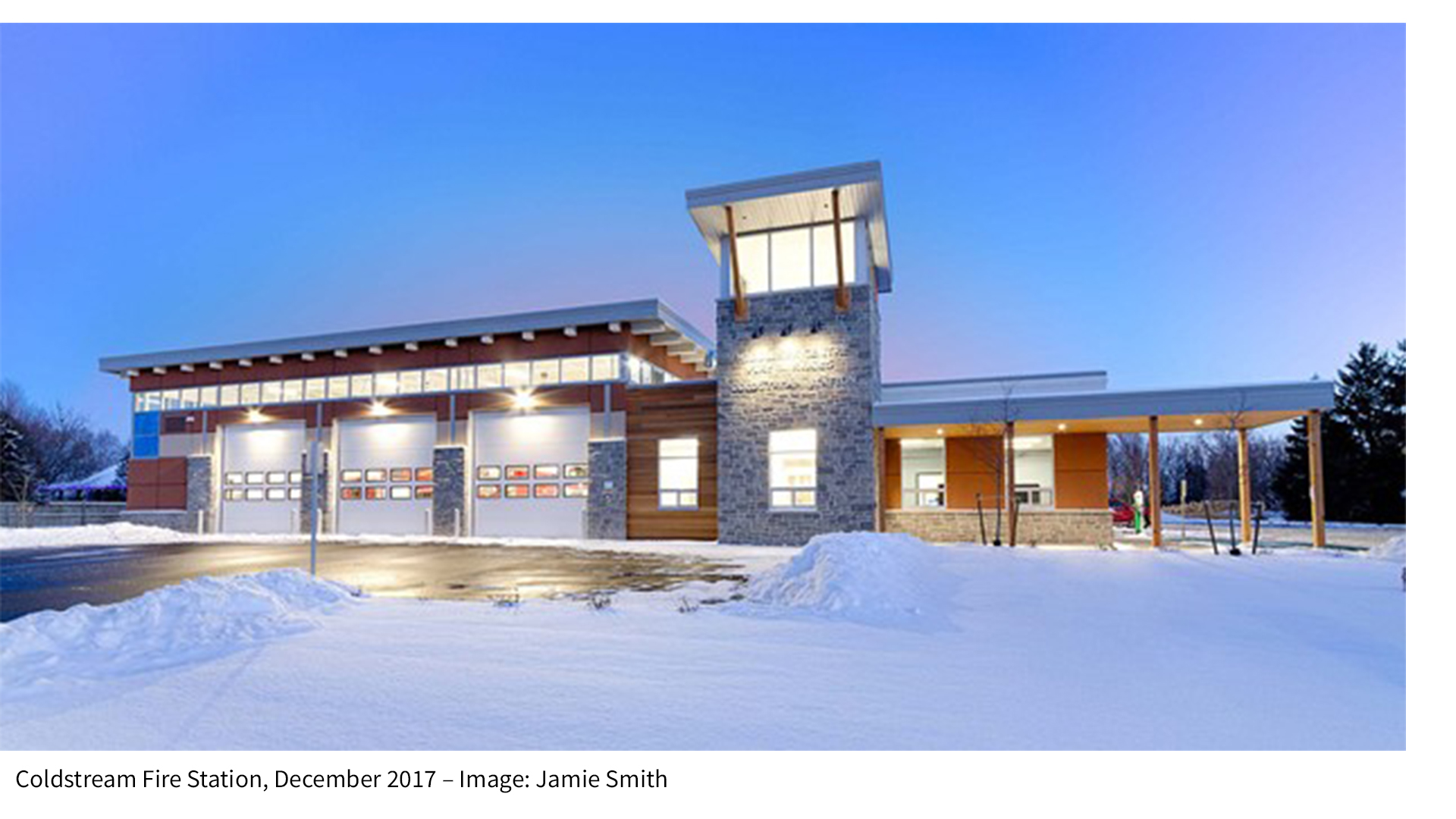 Prior to 2016, “Net-Zero” was a term that I only heard of a handful of times.  Who knew that our little village in Coldstream, Ontario, was on the verge of becoming home to the first Net-Zero Fire Station in Canada?  I sure didn’t and I don’t think many around the project table believed it either, yet here we are.

The new Coldstream Fire Station opened in December 2017.  The road to get here was not an easy one.  As with many municipal projects of this size, it came with its fair share of hurdles to overcome.  I need to take you back a few years to highlight some the challenges that were met along the way. Looking back, I can say that the construction phase was the easy part!

The original Coldstream Fire Station, located 300 m down the road from its current site, was built in 1880 as the new town hall and community centre, and had served many purposes over the years.  From 1920 to 1925 it was a school and eventually became the home of the then Lobo Fire Department in 1969. As the station grew to house four fire vehicles and a boat for the Water Rescue Team, the old site no longer met the needs of the growing fire department and it posed many infrastructure challenges.  The time had to come for the municipality to replace the station.

The municipality had set aside funds in the capital budget for a new station.  When a more serious push to build a new station began in 2015, we quickly realized that the budget that was set aside fell far short of what we needed to build.  This was well before we even mentioned the words Net-Zero.  Staff had many conversations with Council to secure the funds for the project to move forward.

With funds secured, our first order of business was to hire an architect to help us identify the functional needs of the building design and establish a complete project budget. G. Douglas Vallee Limited was selected as the primary consultant.

In late 2015, the project team began focusing on the possibility of a Net-Zero facility.  I will say that I was late to the table in believing that this was the project of choice for such an investment.  I mean, this was a fire station that sat empty the majority of the time, and we were having a hard enough time convincing our municipal council and community that the project budget needed to be more than double of what was originally set aside – and now we are asking for an additional 15% for sustainable features. This most certainly made for some interesting discussions and debates with our Project Steering Committee.

However, with available grants coming on line, a strong project team in place and the support of council and the community behind us, the stars began to align to truly make this a success story.

A grant through the Green Municipal Fund of the Federation of Canadian Municipalities (FCM) allowed the municipality to complete a feasibility study for the Net-Zero fire station. Jim Fonger and his team at Ameresco looked at many design options, working closely with the project team and our primary consultant, Vallee.  Following a design charrette (strategy session), the team narrowed down which building system would work for this project.  This charrette was critical in identifying how we were going to achieve our target of becoming a Net-Zero facility, with solar and geothermal being the big-ticket items to help get us there.

With the project budget approved and all the studies completed, construction of the $2.8 million fire station began in March 2017. The station officially opened in ten months later, in December 2017. 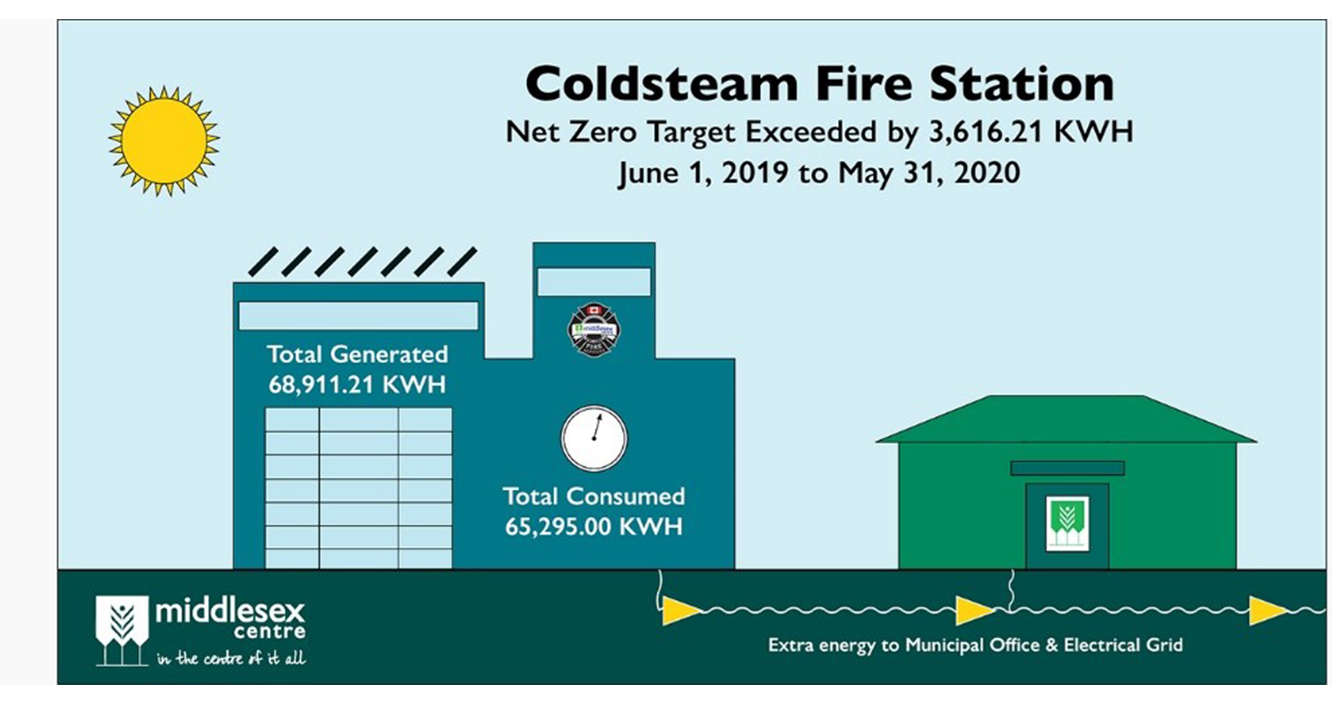 Once the new fire station was in operation, the work began to justify that the building was truly Net-Zero.  One of the unique features of this build was how we decided to best harness the solar energy we would be generating.  The new fire station shares the site with the municipal office.  The design allows for any solar energy that is harnessed but not used at the fire station be sent to the municipal office, and for any energy remaining after the office had gobbled it up, to be sent back to the grid for a credit.  Utilizing our Intellimeter software, we can continually monitor and record the energy use right down to the circuit level and measure this data against the solar energy created. 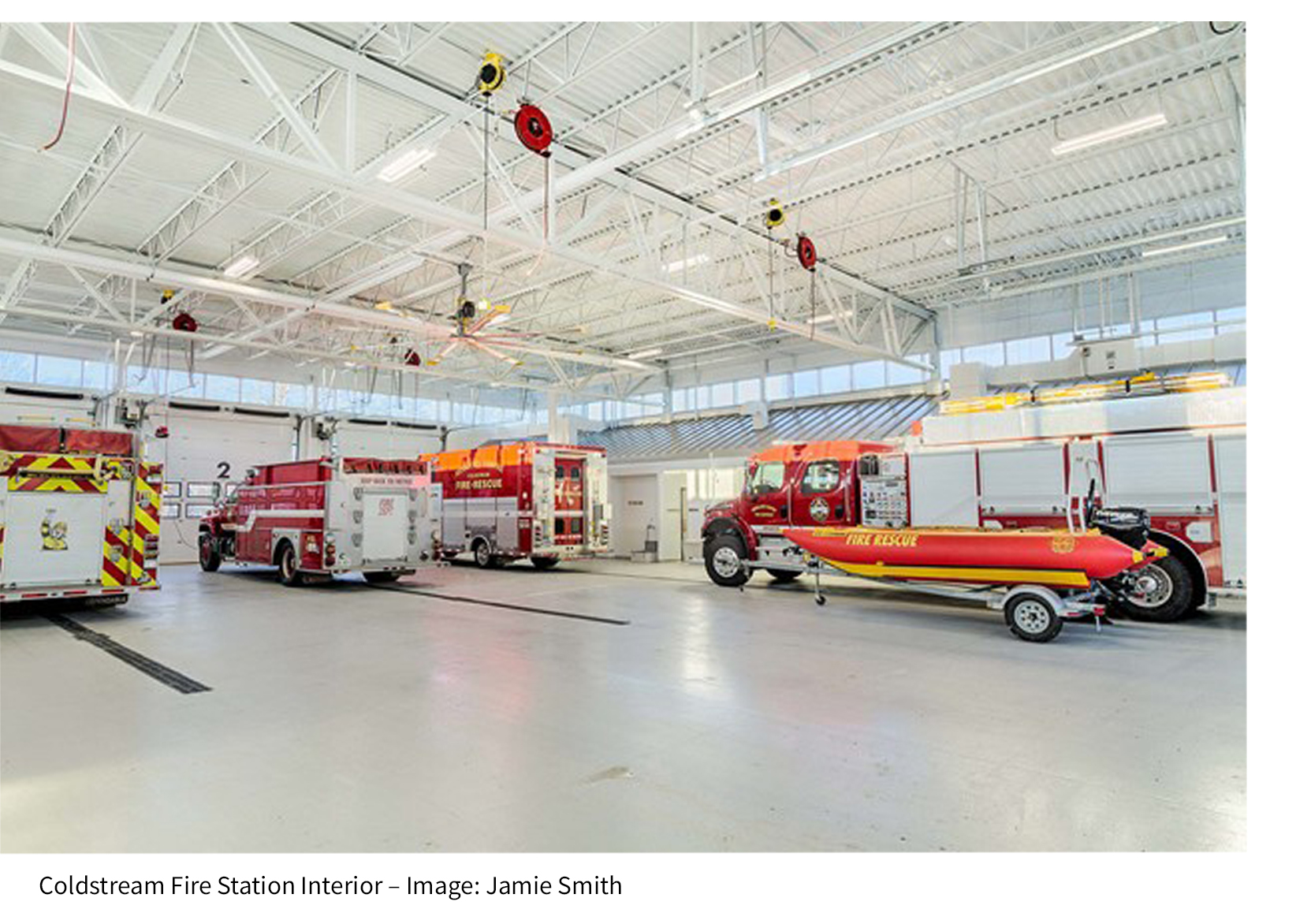 Now in its fourth year of operation, we look back and truly celebrate this project.  Although there were challenges such as budget, council and community buy in, project charters, grant applications, feasibility studies, hydro agreements and so on, we were fortunate that those stars aligned.

In my career, I have learned something from every project I have ever been involved with, however this one takes the cake.  Perhaps the most important lesson is that we now add a sustainable lens to all building and retrofit projects we are planning for Middlesex Centre, and we do that with confidence that we can deliver on our energy targets.  Our fire service is proud of this building and they are embracing the sustainability ethos of the building in their operations. Colin Toth, the fire chief for Middlesex Centre, comments that, “Middlesex Centre Fire Services has adopted the municipal direction in support of green energy and initiatives. The fires service has moved towards operationalizing ‘green energy’ tools such as battery-operated scene lights, auto extrication tools, and energy-efficient flashlights, among other initiatives.”

Mayor Al had a green vision for this municipality, and with this project and those going forward, we honour his legacy by being good stewards of the environment and making sustainability a priority.