Streetlights - The End of an Era

Since March of 2013 until early 2021, the LAS Streetlight Program helped municipalities across Ontario upgrade their systems to energy efficient LED. Over the eight years it was offered, 190 municipalities chose it as their program of choice. This means you can see the results of our work throughout 43% of the Province!  And with the overwhelming majority of municipalities now lighting their roadways with LED, Ontario became a Canadian leader in streetlight integration.

Our Program was built in response to several municipal requests for assistance in Fall 2012. This is a great example of how LAS worked with municipalities across the province to implement new technologies that would save money and last for years. In fact, some projects realized savings of up to 75% off their monthly streetlight hydro bills! That’s a lot of electrons! 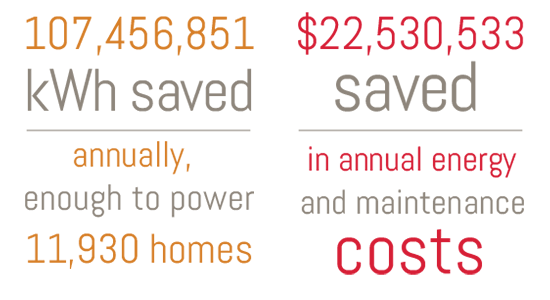 Some of the other key benefits of the Program included 80% savings on maintenance activities – gone are the days of mass re-lamping programs and lights that turn off when their ballasts overheat, only to turn on again when they cool down. And with the expected decades-long life span, upgrades can be put in the back of our minds for a long time. The improved lighting quality means the orange glow is now absent over cities and towns, and you can finally see the actual colour of objects under the lights. An we would be remiss if we didn’t mention the environmental benefits including recyclability and dark-sky compliance. Though it does make me wonder if the birds will start using the moon and stars to navigate now that the cities are less visible from the sky.

The Program was certainly a leader in the industry, having been asked to present at international conferences and being recognized by the World Bank and Lightsavers Canada. This success was not solely LAS though. A program of this magnitude could not have been completed without our dedicated partners at Cree Canada and RealTerm Energy. These companies worked tirelessly to make sure projects were completed to the highest quality that our municipalities expect and deserve. And we can all proudly say that no project was complete until every last issue was dealt with, and the municipality was fully satisfied. That did mean a lot of sleepless nights for some, but in the end it was totally worth it! 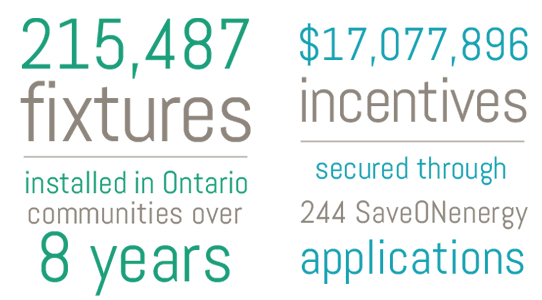 The LAS Program team introduced a lot of benefits to the sector – our proprietary mobile app used during construction was eventually imitated by others. Our unique financing terms meant that even if you didn’t have the cash now, you could upgrade your lights and use the savings to pay off the loan while also benefitting from an exceptional maintenance plan. Installations were even double checked by a third party to make sure any potential issues were caught before they happened.

Under our program, Cree was the first streetlight manufacturer to offer a standard 10-year warranty at no extra cost. RealTerm Energy provided photometric design for every unique street in a community and their staff actually visited every streetlight in a community to collect basic design parameters. (It’s safe to say lots auditors got their steps in.) Our program even had a hand in some of the first “smart city” installations in Ontario.

Most people don’t even think about the streetlights in their communities, and I have to admit, this was not top of mind when we started this program. I’ve grown a new appreciation for streetlights. Now I often find myself looking up at the streetlights, thankful that Ontario’s municipalities are doing their part to modernize neighbourhoods, save energy, and keep their residents safe.

LAS is very proud to play a role in this effort and we thank the 190 municipalities that trusted your streetlights to our program.